Croatia defender Dejan Lovren insists he is ready for a fiery clash against England on Sunday.The Three Lions host Croatia in their final group game of the UEFA Nations League and a victory against the World Cup runners-up will guarantee a place in next summer’s semi-finals.The Liverpool defender was part of Croatia’s squad throughout their impressive run to the final of this summer’s World Cup in Russia.Both teams know a win at on Sunday will see them top League A’s Group 4 and advance to the next stage, and Lovren is relishing the prospect of coming up against Gareth Southgate’s side.“It’s a final against England, so of course we will be strong,” he was quoted as saying by The Daily Mirror.“I think it will be a fiery game against them – they know us and what they can expect from us, and we will not run away from that.” 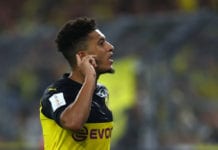 Crouch: Liverpool could beat Man United to Jadon Sancho Andrew Smyth – September 14, 2019 Peter Crouch wouldn’t be surprised to see Jadon Sancho end up at Liverpool one day instead of his long-term pursuers Manchester United.“I love playing against England. I know the players in the Premier League and I have competed against them.”England and Croatia met earlier in the Nations League as they played out a 0-0 draw last month in Rijeka, and Lovren feels recent history will give Zlatko Dalic’s men plenty of belief.“People criticise me, but they didn’t say much when England didn’t score against us in the last game,” he said.“They will have extra motivation after the World Cup, but I think we will be brave.”“It will not be a friendly. We have beaten Spain and we want to win it now.”Spain will top the group, should England and Croatia play out a draw on Sunday night.